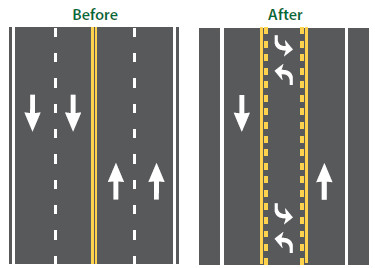 A road diet is generally described as "removing travel lanes from a roadway and utilizing the space for other uses and travel modes." (Rosales, J., Road Diet Handbook: Setting Trends for Livable Streets, Institute of Transportation Engineers, Washington, DC, 2006.)

The Batavia Bicycle Commission supports the transformation of Batavia Avenue (Route 31) by way of the most common 4-lane to 3-lane reconfiguration illustrated above.

This particular road diet plan typically converts an undivided four-lane road into two through lanes and one center turn lane, with the remaining space used for bike lanes and/or pedestrian safety islands. With enough space, parking spaces can also be retained or added where feasible.

The primary objective is safety through traffic calming and increased visibility. This means safety for all roadway users, including pedestrians, bicyclists, and car drivers.

Batavia Avenue was not originally sized for four lanes- there are very few times you will see cars traveling side-by-side in the same direction at the same speed- the lanes are too narrow to feel safe doing that. Few people would feel safe passing a bus or commercial truck, let alone driving alongside one, for fear of being nudged into oncoming traffic or brushing the right curb.

A center turn lane provides safe left turns for cars, reducing the incidents of rear-end and side-swipe collisions at intersections and driveways. Dedicated bike lanes separate bicycles from the flow of car traffic. Pedestrian safety islands provide a haven at busier times of the day. A center-turn lane also serves as a safety zone for pedestrians who choose to cross mid-block.

The white diamonds in the figure below indicate the possible crash scenarios involving turning vehicles (blue arrows) and other vehicles (red). The road diet does not eliminate crashes, but removes some of the situations in which they could occur:
Here is a real-world Batavia example: consider what has proved to be an awkward intersection at McKee Street and Batavia Avenue. With a center turn lane, not only do northbound drivers making a left turn have better visibility, but southbound drivers have a better view of PEDESTRIANS crossing Batavia Avenue at the currently designated crossing. And cars turning from McKee on to Batavia Avenue will have an easier time doing so.

This is only one example. There is no intersection along Batavia Avenue that is comfortable for pedestrians to cross without additional means to slow or stop traffic. A four-lane to 3-lane conversion will render the roadway visually narrower, which will tend to slow down most traffic.

Bicycle lanes will promote the use of bicycles for transportation and utility between the East and West Sides of Batavia. The Fox River Trail is a great resource, but it doesn't always take people where they may need to go if they choose to go by bicycle.

Our neighbors to the west have implemented three lane conversions statewide. The Iowa Department of Transportation is a strong proponent of road diets and has devoted a section of its website to information on road diets including a myth-debunking fact sheet, and has also produced the video below to help educate people on the benefits of the four-to-three-lane conversion.

Hungry for more? There is a wealth of additional information on road diets available from the Federal Highway Administration's Road Diet Informational Guide.